The last two weeks have seen the release of Hive v1.0, elastOS v1.1.0 for Android, a CR Voting Capsule on elastOS, and a new upgrade for Elastos Wallet.

Also in this issue, Kiran Pachhai released two new videos on Tuum’s Youtube Channel on the current state of Elastos and a crash course on how to build a dApp and Trinity Tech gives an update on iOS integration.

Carrier
-Released Carrier Native / Android / Swift SDK v5.5 version
-Improved the support interface for WebRTC and continued to optimize the implementation of Carrier WebRTC SDK
-Test verification of Carrier Native SDK cumulative update
-Designed to support Carrier to send large messages (more than 1K, but less than 1M)
-Updated Carrier Plugin’s Carrier multi-instance modification to the master branch, officially merged into the elastOS master branch
-Organized the characteristics of Feeds dApp and optimized UI / UX interface design
-Based on a new round of Review comments, continued to optimize the UI / UX code of the Feeds dApp, and released an internal version for verification and the next round of Review every weekend
-Designed Feeds dApp to support Elastos DID implementation

DID Side Chain
-Discussed the implementation scheme of DID Spec v0.3

Elastos Wallet
-Released Android v1.4.2
-Completed the module development of ETH side chain for SPV SDK for the following: EthereumAmount, EthereumAccount, EthereumTransfer, EthereumBlock
-Analyzed the reason why the ID chain SPV synchronization speed is slow based on the collected log data
-Fixed bug of exporting timestamp in keystore
-Fixed the problem that the dependent library boost cannot be compiled after upgrading Xcode

The Elastos Foundation has released a statement regarding the upcoming CRC election process: https://news.elastos.org/crc-schedule-update/

elastOS Version 1.1 for Android comes with several new features including a sleek and enhanced UI/UX. Read about all the new upgrades and download today in the Google Play Store. https://news.elastos.org/elastos-version-1-1-official-release-on-android/

Community Announcement: Trinity Tech Ltd., the team responsible for the development of elastOS and its integral technologies, would like to provide an update on the current state of iOS integration. elastOS has progressed to Apple’s testflight, an important milestone in the iOS App Store’s publication process. However, because the elastOS app currently contains a webview wallet, it does not meet the criteria required to advance to publication. In the interim, Apple has validated elastOS for testflight while a native wallet is developed. In order to implement the necessary development adjustments, Trinity Tech has conservatively set aside two months. In the meantime, while development is underway on the native wallet, all community members interested in providing feedback and contributing to the testing process are encouraged to email the team directly at [email protected].

Thank you for your patience and continued support.

Two new dApps have been released on elastOS: The CR Council Members Voting Capsule and the ElaNodes Capsule, your go to resource for all things supernodes. Find them both here: https://scheme.elastos.org/app?id=org.elastos.trinity.dapp.dappstore

Looking for updates on all of Elastos’ various projects? Then check out our regularly updated Modules Status on the Elastos Developer portal at: https://developer.elastos.org/discover_elastos/modules_status/

The latest version of the ELA Wallet Android v1.4.2 has been released.

The details of this update is as follows: 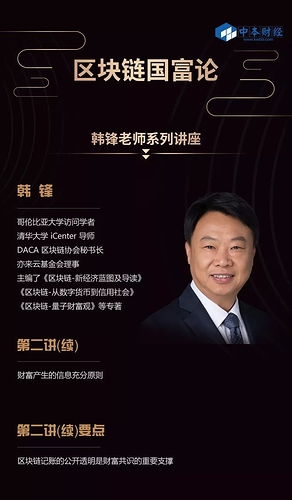 FH-ZHongben.jpg750×1283 87.4 KB
Feng Han was invited to the livestream of Zhongben Finance where he delivered a lecture on National Wealth Powered by Blockchain. Mr. Han focused on one of the principles of wealth generation: sufficient information.
Mr. Han thinks there are five principles for wealth generation, they are as follows: First, the privatization of property. This area is self-evident because if property is not private, human beings would not trade. The other areas are price anchoring, technology advancement, large-scale transactions and sufficient information. Please click the picture for more details.
1 Like